This huge park lies in central-western Zambia. To put its size in perspective, it is the third largest park in Africa and covers an area equivalent to Wales in the UK and twice that of Yellowstone National Park in USA. It spills into three of Zambia’s provinces and is not that far from Lusaka and the well-populated Copperbelt, yet it remains relatively undiscovered.

The Kafue River and its numerous tributaries supply water to a diversity of habitats, with extensive riparian woodlands opening out at intervals to wide grassy areas known as dambos, where antelopes are attracted by the good grazing. Termite mounds, phoenix palms and fig trees punctuate these plains. The landscape is generally flat, or at most gently undulating.

A dominant feature in the north of the park is the Busanga Plains – a vast floodplain fed by the Lufupa River system. These seasonal floodplains have been known to dry out to the extent that hippos become trapped in shallow muddy pools. Normally though, the overflowing river results in well watered grasslands that attract masses of game.

In the south of the park are dense double canopy forests, tall mopane woodland and Kalahari sandveld with the wide Ninzhila Plains dotted by baobabs trees and white-sapped euphorbias. At the southern end of the Kafue flats, the Kafue River is dammed for hydroelectricity and forms a massive lake on the park’s eastern border, which is used for boat cruises and provides excellent game and bird watching.
Cheetah couple

ANIMALS AND BIRDS
Kafue’s ecological diversity has resulted in an impressive array of wildlife and wide range of species. Game viewing in the south is more difficult than the north due to thick woodlands, so much of the accommodation is situated in the north near the Busanga floodplains, where excellent animal sightings are guaranteed. Kafue is one of the best parks in Africa to see an incredible variety of antelopes including; roan, sable, hartebeest, eland, wildebeest, impala (in the south), puku (in the north), oribi, sitatunga, duiker and waterbuck plus red lechwe in their thousands. There are plenty of predators with cheetah, leopard, wild dog, hyena and lion, who will chase lechwe right into the water. There are also a host of smaller carnivores including the side-striped jackal, civet, genet and various mongooses. Bush pigs and warthogs abound and there are masses of elephants, hippos and crocodiles too. In fact the only animal missing is the giraffe!

The birding is exceptional, especially on the rivers and the dambos, with over 400 species, notably goliath herons, fish eagles, wattled crane, purple crested lourie and Pel’s fishing owl.
Fishing is excellent and most lodges have tackle and rods to catch bream, barbel and fresh water pike. There is a fishing competition every September on Lake Itezhi Tezhi.

SEASONS
Zambia has three main seasons:
Very Hot Rainy Season: December to April is hot, humid and rainy with an abundance of insects. Many lodges close from November to April, as roads become impassable. Expect midday temperatures of 82°F (28°C)
Cool Dry Winter: May to September is cool and dry with pleasant term temperature around 75°F (24°C). Night temperatures go down to 46°F (8°C)
Hot Dry Season: October and November becomes hotter reaching approximately 95°F( 35°C)??, but lacks humidity.
The best time to visit is during the dry months from June to November.

END_OF_DOCUMENT_TOKEN_TO_BE_REPLACED 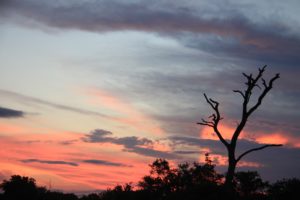 This huge park lies in central-western Zambia. To put its size in perspective, it is the…