Malilangwe meaning “Call of the Leopard”, is a 100,000 acre private reserve containing Africa’s great “Five” (leopard, lion, elephant, rhino and buffalo). It is a non-profit trust taking great care to include the local communities in its running and development. It is a source of livelihood for all the people who live in the region, who also benefit from improved healthcare and education.

The reserve has diverse lowveld ecologies full of animals big and small, but the philosophy here is not to rush around ticking off the number of species. It is rather to take your time and enjoy every wildlife encounter. There are only two safari lodges in the reserve, both specializing in allowing time to chill out and listen to the sights and sounds of the bush.

Pamushana lodge has been rated by one US safari expert as being, “One of the best in Africa.” Malilangwe has escaped most of the wildlife poaching which has occurred as a result of Zimbabwe’s recent political and social upheaval, and hopes to maintain its success.

ANIMALS AND BIRDS
The trustees undertook a mission from the very start, to try and give protection to endangered and rare species so that they may reproduce in their natural habitat. This they have done with black rhino to great success and now include white rhino, roan antelopes and Lichtenstein’s hartebeest amongst their most valued breeding animals.
Buffalo

Along with the Big Five, Malilangwe like to show you their Little Six; six species of small beautiful antelope – klipspringer, Sharpe’s grysbok, grey duiker, steenbok, rare Livingstone’s suni and oribi who reappeared after almost dying out in the great drought of 1992-3. Some rarely seen shy animals that you may be lucky enough to observe here are aardvark, painted hunting dogs (wild dogs) and caracal (lynx cat) with long tufted ears.

Malilangwe is a haven for birds with over 400 species and one of the highest concentrations of large breeding eagles in the world. There are 14 species of eagle, 11 hawks and 9 different owls. Unlike the large mammals who reside here all year, birds come and go. February sees huge colonies of tiny quelea who come to nest here in their thousands. In June purple rollers arrive from Mozambique and in November woodland kingfishers pull in from West Africa. From the Asian steppes migratory eagles and falcons come to join the resident raptors. Amongst the team of Malilangwe guides are some highly respected and passionate bird experts.

The lakes contain some true trophy-sized bass and keen anglers may try their hand to catch them.

SEASONS
Dry Season: The cool dry season is from April to August. This six month period of almost completely dry, sunny weather gives average temperatures in the mid 70’s°F to the low 80’s°F (23-28°C). By late June the leaves begin to fall from the trees and the tall grasses have been trampled by game, making it prime game-viewing time. The hot dry spell is from September to November and game viewing is at its peak especially in the cool of early morning and early evening. Midday temperatures are a sizzling 90°F+ (34°C+), but humidity is low.
Rainy Season: From November to March it rains about one out of every five days. The sun emerges again after every thunderstorm and humidity and heat are high. The greenery is lush and wild flowers emerge in profusion. Thousands of migratory birds arrive to take advantage of this of plenty, when nature puts on her fullest displays.

FACTS
Malilangwe Reserve has 100,000 acres of pristine bushland.
Just two private lodges have game viewing access to this land.
The reserve is in the south-eastern corner of Zimbabwe at 21 degrees latitude.

END_OF_DOCUMENT_TOKEN_TO_BE_REPLACED 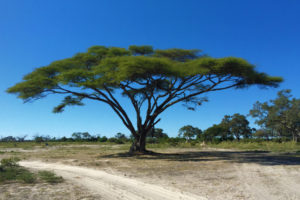 Malilangwe meaning “Call of the Leopard”, is a 100,000 acre private reserve containing…