The extraordinary Matobo hills are full of hidden caves, sacred places and Bushman paintings. Archaeological digs have found artifacts over 35,000 years old. Today the hills are the spiritual home of the Matabele people and a visit to a local village will bring you up to date with present day tribal culture in this area

The massive rock formations of Matobo are awesome in their grandeur and create a unique atmosphere. Giant lichen-streaked boulders have weathered in place to create tremendous sculptures, which balance precariously in defiance of gravity. Cecil Rhodes – businessman, imperial visionary and colonial statesman of British colonised Southern Africa.

Most of the time it is peaceful and scenically beautiful with distant purple hills of the Zambian escarpment on one side and wooded slopes leading to the interior of the national park on the southern banks.

Along the river’s edge are wide green flood plains tramped by elephants and buffalo who take little notice as you drift silently by on your two-man canoe.

At the public entrance to this park you are strictly warned that it is offence to take citrus fruits in with you. Elephants have a craving for oranges and will trample your tent or upturn your car just to get to them!

ANIMALS AND BIRDS
Matobo is the domain of the impressive Black Eagle and is their chosen breeding ground. These powerful birds have no trouble targeting their main diet of rock hyrax (rather like a very large guinea pig but genetically closely related to the elephant)! These comical little creatures scuttle around the rocks in large numbers and there are plenty of small buck including rock-hopping klipspringers.

This is perfect leopard country and although many live here, they are seldom seen. You should however, be able to see giraffe, zebra, jackal, and perhaps caracal, porcupine, civet and genet. Ancient rock paintings showed that rhino used to live in this area, so the Whovi rhino sanctuary, adjacent to the park, reintroduced them and both black and white rhino are doing very well.

Birds to watch out for are a whole host of eagles, hawks, falcons and other raptors, plus colourful purple-crested louries who prefer the cover of dense foliage.

SEASONS
Dry Season: The cool dry season is from the end of April to August and the hot dry spell is from September to early November when temperatures get to 90°F (34°C), but humidity is low.
Rainy Season: From November to March thunderstorms unleash their might every few days but the sun re-emerges and humidity is high.

FACTS
The park covers 164²miles (424km²)
The region boasts over 300 rock paintings, many of which can be hiked to.

END_OF_DOCUMENT_TOKEN_TO_BE_REPLACED 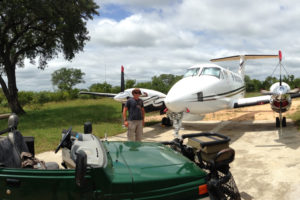 The extraordinary Matobo hills are full of hidden caves, sacred places and Bushman…