With little awareness of what lies ahead, the steadily flowing Zambezi River casually approaches Victoria Falls, then topples out of control over a sheer 330-foot (100 metre) drop. This mile-wide (1,609 metre) curtain of water really is as spectacular as its reputation and can be viewed from various angles at numerous viewpoints. It is the widest curtain of falling water in the world, and during the warm wet months of February to April, it cascades at over thirty times its dry season flow. The resulting spray can be seen from 20 miles (32kms) away and explains the local African name for the falls - Mosi-oa-tunya ‘Smoke that Thunders’

The best view of the falls is from the air and the so called ‘Flight of Angels’, was born out of Livingstone’s November 1855 diary entry when seeing the falls he stated, “Scenes so lovely must have been gazed upon by angels in flight.” It was Cecil Rhodes and his dream of a railway from Cape to Cairo, that brought settlers and tourists to the area in 1905, and the original Victoria Falls Hotel was built soon thereafter. Around the falls is 9 miles² (23 km²) of riverine jungle with ferns, figs, ilala palms, vines, mahogany trees and patches of rain-forest, providing a tranquil setting from which to view the five cascades. Antelopes can be seen in these areas and troops of nonchalant baboons patrol the walkways. Airborne droplets of fine mist creates an almost a constant rainbow, which can even be seen by the light of the moon.

The Victoria Falls are shared by both Zambia and Zimbabwe and is territorially divided by Cecil Rhodes’ famous bridge – which he never lived to see. As well as a spectacular view down into the gorge, this bridge has more recently become famous for its adrenaline-pumping bungy jump with a fall of 364 feet (111 meters)! The other most popular adventure pursuit here is white-water rafting on the Zambezi.

ZAMBEZI NATIONAL PARK
5½ miles (9 km) from the falls is the Zambezi National Park. It stretches along the Zambezi for 25 miles (40 km) and boasts several safari lodges. The lodges are set along the riverbanks amongst Ilala palms giving leisurely views of the gently flowing river. Sundowner cruises paddle these deceptively calm waters above the falls.

ANIMALS AND BIRDS AND FISH
The park contains some big game such as elephants, buffalo, lions, giraffe and antelopes like kudu and waterbuck, along with plenty of hippos and crocs. Riverine bird life is plentiful with egrets, herons, cormorants, fish eagles and kingfishers. The Zambezi is renowned for its tigerfish, tilapia and giant vundu (catfish) over 6 ft long (2 metres).

SEASONS
Dry Season: May to October is usually dry and September and October allows better photo opportunities at Victoria Falls as there is much less spray, but the torrent is slightly less impressive. The dry season is also better for viewing game in the Zambezi National Park.
Rainy Season: It usually rains anywhere from November through to April, creating a hot and humid climate. The falls are at their wettest and most spectacular by the end of this summer rainy season.

FACTS
Victoria Falls is one of the natural wonders of the world and a World Heritage site.
The Zambezi or “great river” is named in the language of the Batonka tribe.
The Zambezi is 1,687 miles long (2,700 km) and is Africa’s fourth largest river.
It originates in central Africa and ends in Mozambique at the Indian Ocean. To the Mozambicans it is known as the “river of great floods.”
Cameras and clothes tend to get wet when visiting Victoria Falls, but waterproof capes and umbrellas are available for hire.
There is plenty of accommodation in this area ranging from elementary fishing camps to rustic or exclusive safari lodges and five-star hotels.

END_OF_DOCUMENT_TOKEN_TO_BE_REPLACED 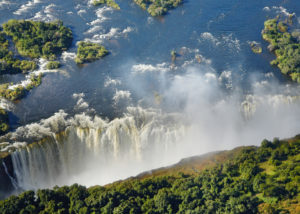 With little awareness of what lies ahead, the steadily flowing Zambezi River casually…